Most of us do it at least once a day, and it can be very addicting -- text messaging or texting. With our reliance on technology and desire for instant gratification, it's easy to get hooked on the anticipation of getting that text message. Texting itself can be beneficial to our lives, but when you mix texting with driving it can have dangerous and sometimes deadly consequences. 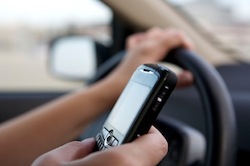 Furthermore, a study by the Virginia Tech Transportation Institute revealed that people who text and drive are 23 times more likely to get into a car accident than people who don't. According to the study, drivers who text while driving divert their attention from the road for an average of five seconds while texting. This may not seem like a long time, but think about this: at 55 miles per hour, you can travel across the length of a football field in five seconds.

The city of Parkland, Florida, became the first city in Broward County to ban texting and driving in October 2009. The only people who were allowed to text while driving were police officers on duty and fire officials. Unfortunately, the ban could not be enforced by the city of Parkland because the ordinance was preempted by state law which reserves the authority to propagate and enforce such traffic regulations.

Florida lawmakers have also taken initiative to help reduce texting and driving. Since October 1, 2013, texting is considered a secondary offense in Florida. In other words, the driver must be pulled over for another violation, such as speeding or careless driving. Florida is the 41st state to impose a ban on texting while driving, however, the ban on texting varies from state to state.